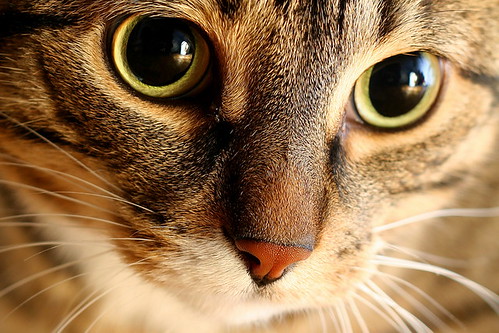 The Oncilla Leopardus tigrinus, also known as the "Little Spotted Cat", "Tigrillo", "Cunaguaro" or "Tiger Cat", is a close relative of the Ocelot and the Margay. Considered at this writing to be a near threatened species, its habitat is the tropical rainforests of Central and South America. The Oncilla is a nocturnal cat, preferring to hunt for rodents and birds at night. While the Oncilla can grow to be slightly larger than the average domestic cat, it will normally weigh about 5 to 10 pounds less than a standard domestic cat.